As is now tradition three service users were recognised for their efforts and endeavours over the past twelve months, and were presented with certificates at the annual Christmas party.  Two ‘Certificates of Merit’ were awarded, whislt one recipient received the top accolade of ‘Trainee of the Year’, receiving both a certificate and the ‘David Hough Trophy’.  As the pictures illustrate all three recipients were delighted with their success. 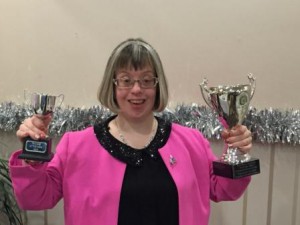