SCB Trustee, Richard Walton, recently visited Rowlinsons Garden Products, based at Wardle, near Nantwich, to mark 18 years of co-operation. Richard, accompanied by the SCB Workshop Supervisor, Ian Hopkins, were welcomed by David Bennion, Commercial and Operations Manager of Rowlinsons, and given a tour of the facility.

A long-time supporter of SCB, Rowlinsons Garden Products has supplied work tasks since the workshop’s outset in 1998. Over the course of the association they have sought out a variety of tasks for SCB service users, mainly associated with the provision of hardware packs for the various kits they produce.

The tasks undertaken by SCB service users are quite complex, requiring precision and accuracy in ensuring that the assembly packs contain the correct quantities of the many components (i.e. screws, nails, clouts, hinges, etc.) that make up the packs.

Speaking on behalf of Rowlinsons, David Bennion said “we have never had any problem at all with the work done by SCB for us and have complete confidence in them to deliver what we need to our exact specification and on time. We look forward to many more years working with SCB as our business and product range develops further”. 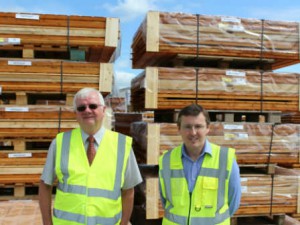 Thank You! Showing our support